Tishmall Turner is serving her first term on the Rincon Tribal Council, as Vice Chairwoman. She has served the Rincon Band in many capacities, which include combining the modern world of education and service beyond the reservation with her passion for her culture and identity as a tribal woman.

“I’m excited and honored to have the opportunity to serve the people of Rincon.  I grew up on the reservation with the intention of always being an active citizen of the tribe. Now that my intention has become a reality, I hope that my education, life experiences, and knowledge of Rincon will help our government and people to continue to thrive.”

As an ambassador working to bring recognition and respect for the tribes within the non-Indian community, she has developed important relationships in the North County’s educational, medical and social services communities that serve the interests of the Rincon Band.  One example is serving on the Palomar Hospital Foundation Board, where she is able to relate to medical staff on behalf of tribal members.

Vice Chairwoman Turner has distinguished herself as a warrior for education, and has served as the first full-time California Indian Tribal Liaison in the California State University system, since 2007.  As Tribal Liaison for California State University San Marcos, she provides guidance to the university president, other campus administrators, and faculty to improve institutional relationships with California tribal communities. In addition to her responsibilities as a liaison, she regularly mentors American Indian students, and conducts outreach to recruit and educated tribal youth about higher education.

“Reaching tribal youth and their families about the value of education and its relationship with ensuring our economic and political sovereignty, is at the heart of my personal and professional goals,” Turner stated.

Asked to speak about the importance tribal education and interface with the state government at the 2016 California Indian recognition day, in Sacramento, Tishmall joined other leaders, including Gov. Jerry Brown, who also spoke.

She serves on numerous boards and committees, such as the Rincon Economic Development Corporation (REDCO) Board of Directors, Palomar Health Foundation Board, and the National Museum of American Indian National Advisory Council.

As Chair of the Rincon Contributions and Sponsorship Committee, she was responsible for shaping the philanthropic policy of the band, and promoting the practice of donating to public education, community events and service organizations in the North County.

“I feel the work through the contributions committee, supporting the welfare of our neighbors and betterment of our respective communities, opens doors that allow us to communicate in very positive ways to others about who we are as tribal people.  We also break down stereotypes and ignorance of tribes by personally developing relationships with other people in North County, who are also trying to making a difference,” she added.

During her term on the REDCO Board of Directors, the tribe invested in a number of “firsts” in economic diversification on the Rincon Reservation.  Adding to the Tribe’s major economic investment – Harrah’s Resort Southern CA,  the REDCO board composed of tribal members negotiated and opened the first 7-Eleven franchise on a reservation, and the first American Indian brewery—SR76Beerworks. The group is currently ready to implement plans for a recreational vehicle park.

Tishmall’s professional memberships include the National Indian Education Association, Leadership North County Alumni Association, California Tribal College, and an honorary membership in the All Tribes American Indian Charter School Future Farmers of America. She has assisted in publishing children’s books and annual calendars in the Luiseño language among other cultural projects. Her contribution to the forthcoming “On Indian Ground,” book series will share high impact practices in parent and tribal community education efforts in California. She currently holds Bachelor’s and Master’s Degrees in Business Administration. 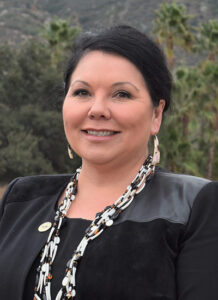