Alfonso Kolb, Sr., ran unopposed in 2016, and is now serving his second term of office as a Rincon Tribal Council Member. The son of Howard and Ruth Davis Kolb, his grandparents are Charles and Corpentina Kolb. Before moving back to the reservation, he had previously been living in Washington State, where he was employed in the lumber business.  His real love and talent however, is making music. At two years, he got his first drum; at eight, he got his first real sticks.  Today, Kolb is an award-winning performer, starring on the drums in many of Native Americans’ most popular bands.

“Our  Native music is an expression of who we are… of our sovereignty,” said Kolb, adding that  drums, long used by Indians to communicate, are medicine for the soul, and for him, “A relief and an outlet.”

Kolb played in a number of bands, finally finding a home with his best friend, Jim Boyd and the Jim Boyd Band.  The band, one of Indian Country’s top entertainers, starred in major music acts across the country and won eight Native American Music Awards (NAMA).  Kolb’s many awards shared with the Jim Boyd Band include  awards  for “Best Compilation Recording,” a recording for the sound track from the movie, “Smoke Signals;  “Best Pop/Rock Recording,” 2003; “Record of the Year” in 2002, 2004, and 2016; “Song Writer of the Year;” “Best Short Form Video/DVD;” and “Artist of the Year” in 2008.

“Music has a life of its own, the majority of songs,” Kolb explains, “have their own power.  The drummer has a big responsibility to lock down the meter, find the groove, and pocket.  I can always feel the audience, whether it’s 15-20 people, or 70,000. Playing for an audience that’s with you, and you are playing to perfection, is a peak experience.  It’s completely gratifying — a dream fulfilled.

“Music has given me a mission: To impress on our youth – that they have a right to dream, they need to dream, and, like me, they can fulfill that dream.”

While performing with the Winterhawk Band, Kolb played on many Indian reservations and at Indian boarding schools in South Dakota, Minnesota, Nebraska, New Mexico, and Arizona, trying to reach the youth musically about their lives.

It was while playing at the boarding schools and seeing the problems and challenges faced by Indian youth, that Alfonso began advising and encouraging Indian kids to get their education and not give up on following their dreams.

“Being Recreation Coordinator was the perfect opportunity for me,” noted Kolb, “Because it provided me with the chance to work with Rincon youth.” On Council, he continues to stay involved with the issues facing Indian children.

“I was very thankful for the chance to be Recreation’s Coordinator, and carry on with a mission to address what’s happening with the youth,” said Alfonso. “I’ve tried to be a positive example to the local kids by providing them with an optimistic outlook about where they can go with their lives.”

Kolb, was born on the reservation, and lived on family land that is now part of the Pauma Reservation.  At ten years of age, he moved back to Rincon, where he lived until his late teens. He attended Pauma Elementary School and Fallbrook High School, later earning an AA degree in General Business from Spokane Community College, in Washington State. He is married to his wife of 30 years, Antheres Calac Kolb. They have four children, James Curo, Jr., Alfonso Kolb, Jr., Robert, and Morrissa.  A proud grandfather, the family of Alfonso and Antheres Kolb includes seven grandchildren from 2 years to 14 years of age: Devin and Adriel Kolb; Kaya, Jasmin, and Javyin Curo; Nikolai Kolb, and Benjamin Harring. 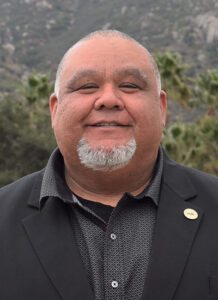