Rincon Chairman Bo Mazzetti grew up and lives on the Rincon Reservation.

Mazzetti has been passionate about ending the settlement for the sake of his father, and other generations of tribal leaders, many of who have passed, and served their lifetimes on the San Luis Rey Water Authority Board, fighting to return the water.  On December 10, 2017, President Obama signed the settlement agreement on behalf of the tribes, and the Vista Irrigation District and Escondido Municipal Water District.

Following his father’s example, Mazzetti was elected Tribal Chairman in 2007, and is now serving his fifth-consecutive term of office. He served previous terms as Vice Chairman and Council Member.

Mazzetti serves as President of the San Luis Rey Water Indian Water Authority, a consortium of five tribes that have been engaged in political and legal activities for 40 plus years to secure water resources lost through federal granting of tribal water rights to local cities.

“The struggle to finalize the agreement the tribes and water districts worked out was a nightmare of legal and bureaucratic wrangling with the federal government.  Today, I am proud I can report to my elders that we have justice at last.”

Mazzetti is advocate of exercising economic rights that protect sovereignty and oversaw the victorious and precedent setting lawsuit initiated by Rincon against Gov. Arnold Schwarzenegger for bad faith compacting and illegal taxation. He has recently been working with a coalition of tribal leaders and the state on returning tobacco and other state taxes that rightfully belong to the tribal governments.

Making a difference in Sacramento, Mazzetti has overseen initiatives such as placing a tribal staff in the Governor’s cabinet, and hiring of a tribal person as liaison to the state’s water authority.  He serves on the Governor’s Drought Task Force, and as a chief organizer of Indian Day in Sacramento.

“One of the really meaningful commitments I made this last year was to be Honorary Chairman of the American Indian Alaska Native Veterans Memorial Committee,” noted Mazzetti.  “It’s shameful that there is not one memorial honoring our veterans.  So I volunteered to help organization raise funds for an exceptionally beautiful memorial installation in Riverside National Cemetery.”

The founding member and former executive director of the Reservation Transportation Authority (RTA); he now serves on the executive committee. Mazzetti has been a Board member on the California Department of Transportation’s Native American Advisory Committee since 1998.

Formerly employed by the Bureau of Indian Affairs Southern California Agency in Riverside, Mazzetti served as the first Indian Community Affairs and Citizen Assistance Officer for San Diego County. A businessperson, he has owned and operated Mazzetti and Company, a reservation–based general building, engineering and well drilling company since 1979.

He attended Laverne College on a football scholarship as a graduate of Orange Glen High School in Escondido; CA, and graduated from California Polytechnic University with a Bachelor of Science Degree in Behavioral Science. Like his parents, who met while serving in the Navy in World War II, Mazzetti served in the United States Navy, and is a Vietnam Veteran. 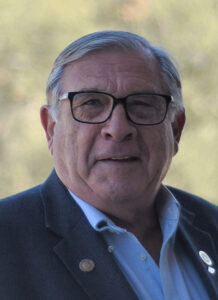