His grandmother is Alberta Calac; his parents are John Constantino, Sr. and Terri Bethel.

“I grew up listening to older family members talking about Rincon and our family history,” said John. “Witnessing their interest in both tribal matters as well as what was taking place on the reservation instilled in me the importance of my Rincon heritage.”

John graduated from San Diego High School in 1988 and joined the U.S. Navy. His service involved worldwide travel aboard ship, serving in the 1st Gulf War, the Persian Gulf, traversing the Suez Canal, and numerous ship assignments in the Mediterranean. He completed his Navy obligation in 1998.

John joined PepsiCo after leaving the Navy and specialized in sales for 13 years. While at Pepsi he began a secondary business in real estate, specializing in remodeling and selling homes.

Speaking about his service as a member of REDCO, John said, “As a member of the REDCO board I recognized the importance of knowing our business partners, making sure those businesses continue to be successful as well as collaborating with them in an effort to find new ways to potentially increase profits.”

He stayed with Law Enforcement until 2020, when he was elected to the Rincon Tribal Council.

“As a member of the Tribal Council it is very important for me to get to know our employees and understand their roles in making tribal government a success.”

John lives with his wife, Sharon, in Temecula, California. They have two daughters, Kaleigh Thompson and Natalie Constantino. 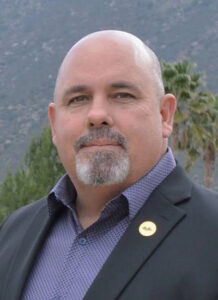