Laurie E. Gonzalez is serving her fifth-term of office on the Rincon Tribal Council.  Among the many interests she brings to the government are expertise in entrepreneurship, as result of her career in business, and a passion for her culture and the living legacies of Luiseño Indians.

Experienced in corporate business dealings and social protocols, Gonzalez was employed for 16 years as administrative support to the CEO/COB of Occidental Petroleum, Dr. Armand Hammer, as well as former Post Master General Marvin Watson and Board members such as Vice President Al Gore, Sr.

“As a member of the Tribal Council, one of my goals is to find ways to bridge, and use the opportunities the business revenues have created to advance our culture and recognition of our place and contributions to San Diego history. At the same time, from point of view of advancing economic development, I believe our culture and traditions have much of value to offer others in these modern times,” Gonzalez statedHer concerns about preserving the tribal past, includes protecting archeological artifacts of the Luiseño people, has led to the creation of the Luiseño Cultural Resources Advisory Group (LCRAG) – a new voice in the cultural arena.

The LCRAG is tasked with monitoring and protecting cultural resources, by walking sites under development with environmental consultants, contractors and construction crews.

“We can’t protect all the property our people inhabited, or our sacred sites, but we can work to reclaim and require cooperation and consultation with developers and other governments to work with us to respect and protect what is historically belongs to our ancestors,” she explained.

Other efforts undertaken by Gonzalez to introduce tribal culture to the guests of Harrah’s Resort Southern California can be viewed in the west wall of the resort’s convention center, and along a special trail. The trail, a vision of Gonzalez, is actually a nature walk, connecting the resort to the tribal museum, where guests may exercise and walk about, learning about native plants and creatures, and ultimately visiting the museum to explore and experience the tribe’s rich history and culture.

“The Rincon Council works hard and is involved in making very significant decisions, and I am honored to represent the Rincon members as we plan a sustainable future for our grandchildren.”

Gonzalez moved to the reservation in 1994, and worked at the Tribal Head Start for six years. In 1999, she began working at Harrah’s in Human Resources, as a national and international employment recruiter. In this position, she also trained her recruits and prepared them to work on the casino floor. She served on the board of The San Diego Committee for the Employment of People with Disabilities, finding jobs at Harrah’s. This resulted in awards and recognition for Harrah’s such as “Employer of Choice,” and recognition from the Governor’s office.

“It was very rewarding to help connect people to good jobs and to know that I was also helping to contribute valuable team members for Rincon’s enterprise,” she noted.

Active on a number of committees, Gonzalez serves on the Culture Committee.  She is also the Tribal Council Admin/HR liaison, sits on the board of The Intertribal Recovery Foundation, and is the Vice Chair of the Intertribal Court of Southern California’s Judiciary Committee.

Gonzalez was a recent recipient of the Intertribal Recovery Foundation’s “Leadership Award.”

With a governing style of quiet persuasion and perseverance, she makes a difference, and creates a continuing awareness of tribal culture and history in decisions and actions undertaken by the Council.  When not on call for government business, she is available as a cultural resource and speaker.

A student at El Camino and Palomar community colleges, Gonzalez also attended San Diego State University, where she took gaming-specific classes, which included Casino Marketing and Human Resources.   In addition to volunteering to educate the community about the Luiseño people and Rincon, she is busy making memories with her grandchildren and supporting projects about which she is passionate. 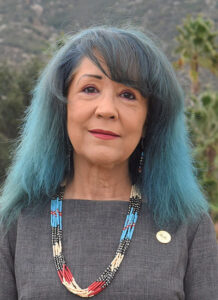