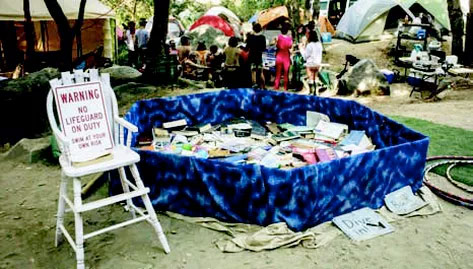 For those of you who do not know what burning man is, it is a MASSIVE art festival that takes place in the Nevada dessert.

It is a culture of people looking to express themselves in the most radical ways in art, style, and music within an encouraged 10 principles outlined by the group.

The burnings are likened to that of a high school bonfire on steroids-huge art structures set ablaze. For those who can’t make the long trip to Nevada, a local alternative will be offered here in October at the La Jolla Indian Campground.

Unlike the dryer parched dessert this local festival will not have burning due to the area’s highly flammable environment.

In some ways I am reminded of a modern day hippy movement after looking into the festival, and in a way it is, but the focus is more on the art. Like many life experiences, participation is highly encouraged at this event, hence the name YOUtopia.

The event will feature outrageous and engaging works of art from many San Diego artitst, DJs, performances, light show, fire dancers, and even your own works of art to showcase if you so chose.

About 3,000 people are expected to come out to the campground this year. This will be the seventh year for the event. What stands out about this event is there will be NO VENDORS! Items will be free or gifts. No one will be selling items. Only ice and coffee are sold on site. All the works of art will be accepted from an unconditional gifting system which is again part of the principles of burning man: #3 gifting.

The festival is very expressive both artistically, visually, and well lets just say bodily as in you may see Adam and Eve walking around which ties into principle #4 self expression.

If you are indeed an artist, one who is an admirer of art, or an adventurer, just as the theme this year says, “Create your own adventure,” you’re bound to find something colorful. Youtopia is not a La Jolla Indian Reservation sponsored event, only a venue for the festival.

The San Diego Collaborative Arts Project, a nonprofit company, raises the money for the event and is responsible for giving out $80,000 in art grants to display at Youtopia.

The event will begin Thursday, October 13 and will go through Sunday, October 16. Basic tickets have already sold out but other options are available as well as tickets for low income. More information can be found online at: sdyoutopia.com

Something Inside is Broken 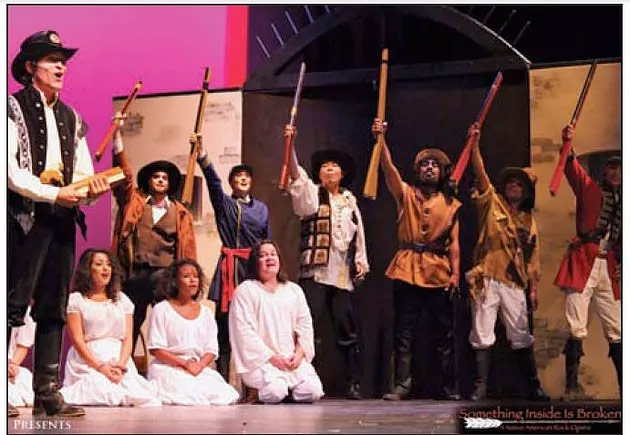 In a nutshell, the central story line of creator Alan Wallace’s Something Inside is Broken tells of the Nisenan people’s encounter with John Sutter in the pre-Gold Rush years of 1840’s central California.

Stories are told through rock ballads and rap, accompanied by Native flute and trumpet, as well as other traditional electric and acoustic instruments. Intended as a celebration of the indigenous Nisenan language, half of the show’s 26 original songs are performed in that language, which, as Wallace told Native California Magazine, “is more intellectual…more multi-dimensional.”

The show’s fall tour, which includes three performances at the California Center for the Arts Escondido (artscenter.org), is underwritten in part by the Rincon Band of Luiseño Indians and is written and directed by Hoopa Tribal member David Kohler, a Stanford graduate, media arts teacher and two-time Native Television Award winner. The story is told largely through the voices of female characters, who bore the brunt of Sutter’s style of servitude, which included sexual exploitation.

Dance captain Natalie Benally, a citizen of the Navajo Nation, plays Pula (“dove” in Nisenan), who falls into Sutter’s clutches. “Colonization stripped our people of our humanity, of our ability to live,” she says “It broke the spirit of a lot of people.” She views the show as a means of healing that brokenness.

Nonetheless, according to Kohler, the rock opera also promises lively music—including electric guitar riffs, hip hop beats, and genre-mixing innovation— as well as moments of hilarity “and the right balance of truth and honesty, satire and optimism.”

Something Inside is Broken is produced by On Native Ground (onnativeground.org), a tribal nonprofit multimedia company well known for producing original content for television, including groundbreaking documentaries on environmental and social justice issues.

For tickets and information, go to: 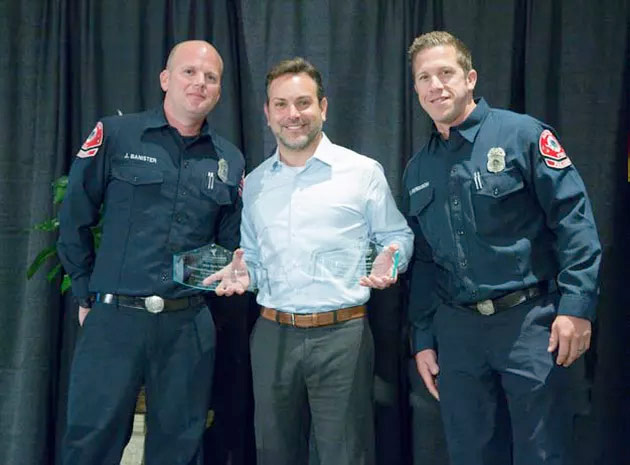 Firefighter Paramedics James Banister and Scott Ferguson of the Rincon Tribal Fire Department were among those honored last week at the 5th annual Hero Awards, sponsored by the North San Diego Business Chamber. The awards were given at the California Center for the Arts, Escondido.

The Hero Awards honor the dedicated officers, first responders, and public safety leaders who have gone above and beyond in their duties saving lives and communities. Honorees were recognized for saving lives, bringing criminals to justice and acts of public service that have impacted our region.

The award noted that the Rincon Fire Department Paramedic team of James Banister and Scott Ferguson has “provided advanced life saving measures to people of the community, resulting in four lives saved in the last seven months.

“Overall cardiac survival rate is 9.5% nationwide, but three people are able to spend quality time with their families today because of the skills, training and dedication to the craft of paramedics demonstrated and applied by this humble paramedic team.

“Most paramedic teams provide patients with quality care and great service on a daily basis. However, few teams have the number of saves in a short period of time as this one. Congratulations, Firefighter Paramedics James Banister and Scott Ferguson.”

The Rincon tribe has joined the Colusa tribe in investing in PRC Composites, a manufacturer of fiberglass shipping crates for military weapons.

PRC Composites has been operating in Ontario, since 2008, and began in Santa Fe Springs in 1973. The company has grown to about 120 employees. The company is hoping to double in size and output over the next decade. The owners welcome the investment by Rincon and Colusa, as they hope it will help leverage its status as a minority owned business.

“Our whole intention with this investment is to grow,” said Gene Gregory, president of PRC Composite. “We’ve grown about ten percent in the last year and our game plan over the next five to seven years is we’d like to double in size.”

The recent acquisition of a majority stake by the Rincon and Colusa partnership provides PRC with a “minority owned” business designation that could lead to more contracts, Gregory said, through government incentives for clients such as rebates and help client companies like Boeing fulfill mandates to work with minority-owned companies.

“With Boeing, we should be able to go to Boeing and say we’re Native American-owned and that should give us an advantage of quoting new work,” said Mike Marvin, marketing director for PRC Composites. “So far we haven’t connected with the right people with Boeing to pass that word down to their purchasing people. They can get a five percent rebate on every invoice that we invoice to Boeing for these products. That’s cash back to Boeing and not a penny back to us.”

Gregory met with Rep. Norma Torres, D-Ontario, who represents Ontario, Pomona, Chino and Fontana. Torres recently visited the plant to find out more about the facility. Torres is a member of the House Subcommittee on Indian, Insular, and Alaska Native Affairs.

“Torres is on the Indian affairs subcommittee and I think for her to recognize that in her district she’s got a government contractor and a minority owned business, we want to see if there are any opportunities we’re missing,” Gregory said. “The government has incentives to do business with minority-owned businesses and to help grow minority businesses.”

Torres was taken on a tour of the plant and said she came to hear more about the company’s expansion plans and the ability to get more contracts for the region. “That means more jobs here, which is the next conversation I want to have with them about training opportunities for their workforce,” said Torres.

PRC, which originally stood for Plastics Research Corporation, was established in 1973 to fill the need for a company that could utilize advances in plastics technology to produce large, special purpose, lightweight and cost-effective shipping and storage containers for military and commercial customers.

“We want to introduce our business to our local congresswoman,” Gregory said. “We’re here in her backyard and we want to show her what we’re doing.”

The company said it has developed more than 100 types of containers and has produced more than 250,000.

The containers are used by the Marines to hold weapons, ammunition and tents. General Atomics, which makes the Predator drone, used PRC fiberglass containers to ship its products to the Air Force. PRC containers are also used that ship airline engine parts from California to Paris for use in manufacturing of the Airbus A350 aircraft.

David Burt has joined the Rincon Band of Luiseño Indians as Director of the Environmental Department.

Burt brings 30 years of environmental operations and program management experience to the position. He comes to Rincon from The Woodlands, Texas, where he was president of Environmental Operations for Lariat Environmental Solutions, Inc. Prior to that he developed the groundwater/ surface water and environmental management departments over a 23-year career at Waste Management, Inc.

“Much of my professional background has been in utilizing science to enhance the environment and reduce liability,” said Burt. “I’ve been directly involved in developing safety and risk management projects and corporate programs from concept to implementation.”

Burt explained that one of his strongest interests is in the field of groundwater and surface water science. “Hopefully this is one area where I can provide an important contribution to tribal government,” he said, citing the long standing water issues at Rincon and Pauma Valley and the legal battles of the San Luis Rey Indian Water Authority.

His environmental background includes training and regulatory leadership in both solid and hazardous waste; environmental risk reduction and monitoring; site assessment and remediation; and groundwater and surface water risk management.

The new environmental director also brings expansive experience to Rincon in the fields of environmental sustainability, water supply, and environmental management systems. Burt has worked with dozens of regulatory agencies as well as USEPA in regulation development and review, environmental guidance creation and implementation, and as an invited technical speaker and peer reviewer.

“We are very pleased to have David join tribal government,” said Human Resources Director Aaron English. “He will have a number of important responsibilities as he gets started in his new position, including developing the environmental department’s infrastructure and supporting the environmental needs of tribal government, the reservation, and surrounding communities.”

“As Director,” English added, “David will also be working closely with the Tribal Administrator, Attorney General’s office and Cultural Resources, as the department faces new environmental challenges and needs on the reservation.”

“I am extremely excited for the opportunity to help Rincon achieve enhanced environmental performance and value,” Burt said. “I believe there is a lot we can accomplish for the Band and I look forward to engaging all stakeholders as we move toward a bright future for the environment, the reservation, and the community.”